No two priceless wishes are the same. We work with patients to determine what is most meaningful for them and what will bring them the most joy. And while these requests may seem small, they can be one of the greatest moments in a terminal patient's life. A small donation from you can be transformed into a bounty of happiness for our patients. Our wishes aren’t extravagant; they can be simple as a picnic or day of beauty. They allow our patients a chance to not focus on their illness, but truly enjoy their time.

A Priceless Wish for John Brandon

During the last week of his life, John Brandon and his wife were treated to their very first vacation thanks to Priceless Wishes. A home hospice patient of Baptist Trinity, Mr. Brandon had led a long, hard-working life. However, he and his wife Cynthia had never taken a trip together because they could not afford it. Near the end of his life, Mrs. Brandon had to work fulltime to support both of them. She told the Baptist Trinity social worker who aided the couple that she assumed they would never be able to take any trip together because of his declining health.

The Baptist team heard Mr. Brandon's story and went to work planning an unforgettable evening for the very deserving couple. They were able to reserve a hotel suite donated by the Peabody Hotel in Memphis for the Brandons to enjoy for a night. The Baptist team also approached a downtown Memphis carriage company about providing a free ride around the city. The owner of the carriage company also owned Westy's restaurant and was so touched by the story that he provided the Brandons with a free dinner at the restaurant.

On Thursday, Oct. 15, 2009, a donated limousine arrived at the Brandon's home and whisked them away for an evening of fun. When the Brandons arrived at the Peabody, Mr. Brandon was presented with a golden duck head cane and was ceremoniously introduced to hundreds of captivated guests as the hotel's Honorary Duck Master. Mrs. Brandon said, "I knew he was in pain when he was in front of everybody at the Peabody, but there is no way you could have wiped that smile off his face. It was such a special night, and it was one that I will never forget."

The evening continued with a horse-drawn carriage ride through Downtown Memphis to Westy's for dinner. Thanks to the Baptist team and some local donors, the Brandons were able to have their wish of taking a trip together granted. The Priceless Wishes program is a simple way to help make wishes come true for hospice patients.

A Priceless Wish for Lori Brown

Everyone had a great time, and Lori's family received the gift of a lasting memory of their beloved wife and mother. 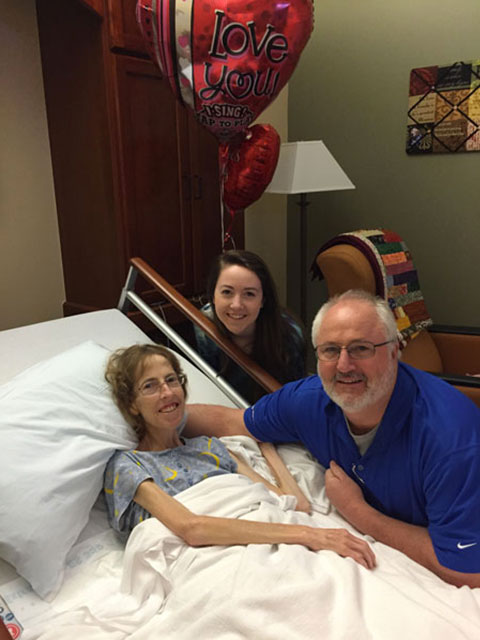 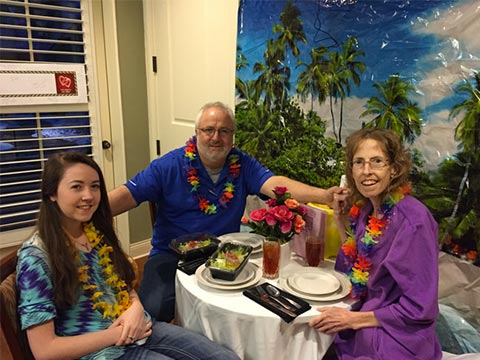 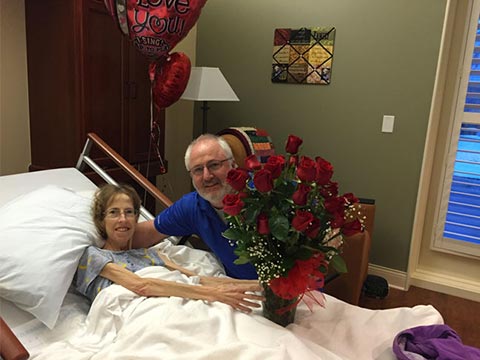 A Priceless Wish for Ann Parker

Ann Parker is a loyal Memphis Grizzlies fan. And as such she received the royal treatment at a Grizzlies game for her priceless wish. She and her nurse, Jenetta Moore, attended the game against the Orlando Magic on Jan. 26, 2015 at the FedEx Forum.

"I've watched games on TV, but being there in person at the arena was a completely different experience," said Parker.

Parker and Moore arrived early to the Forum to claim their courtside VIP seats and watch a little pre-game practice. Throughout the game, several staff members stopped by to drop off gifts for Parker, including a Grizzlies hat, a growl towel, and a gift basket filled with t-shirts and signed pictures from Grizzlies stars Zach Randolph, Tony Allen and Mike Conley.

During halftime, Parker was even surprised by the Grizz mascot, who gave her a poster that read, "Go Grizzlies!" The poster was later autographed by Grizzlies center Kosta Koufos.

"Thank you to everyone who made this night so special," said Parker. "I don't think I will ever forget it."

Moore had been looking after Parker since she first arrived at Emeritus Assisted Living in November of 2014. Their first conversation together was actually about the Memphis Grizzlies, so this was an even more meaningful experience to be able to share with each other. 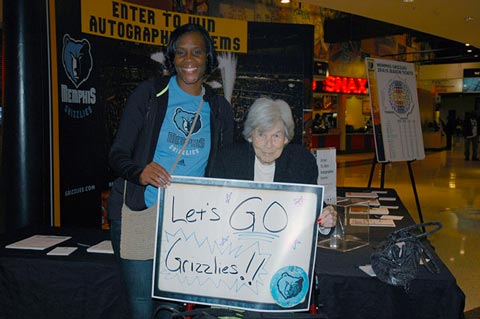 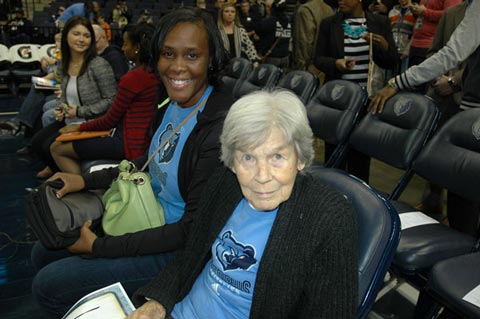 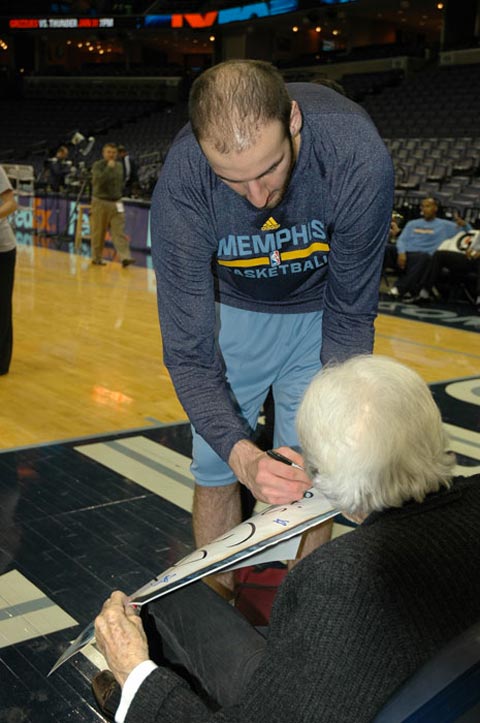 A Priceless Wish for Alice and John

Alice and John live on a farm on the rural outskirts of Memphis, near Highway 64. For many years, John has maintained the farm while Alice goes to her job in town. John became very ill and was no longer able to keep up with the farm work, so Alice began waking up at 5 a.m. to feed the cows and do other chores before heading to work. Necessarily, this means that some tasks had to be left unfinished; there simply were not enough hours in the day.

They began to have a problem with their cows wandering on to the neighbors' properties. The electric fence that penned them in was broken in many places, and Alice did not have time to fix it.

A group of almost a dozen Baptist staff and volunteers drove out to Alice's property and made repairs to all of their electric fences. Alice and John felt a little guilty, having so many people volunteering for the work, but in the end they graciously accepted the help.

John sleeps in a reclining chair as part of his illness. When the volunteers saw that his old chair was very nearly broken, they set about raising money on his behalf and bought John a brand new chair. Alice and John's story is just one example of how Priceless Wishes can touch lives.

"Our team was especially excited to be able to grant this Priceless Wish," said Wanda Miller, CEO and Administrator of Baptist Home Care & Hospice. "Alice is a longtime employee of Baptist Trinity, and the chance to help her and her family made this extra special." 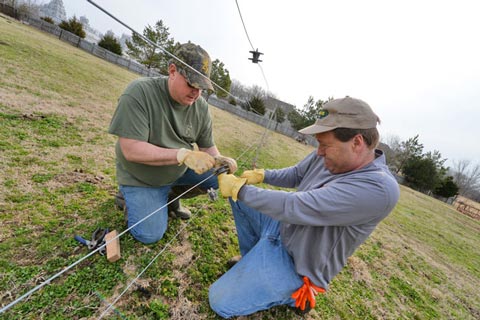 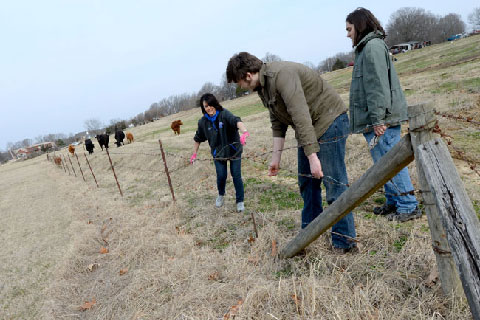 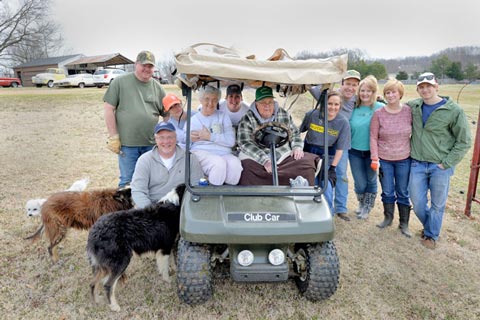